Globalisation can no longer be what it was. What does the future hold then? #Unlock #Ignite & #Transform your business with glocalisation and agility 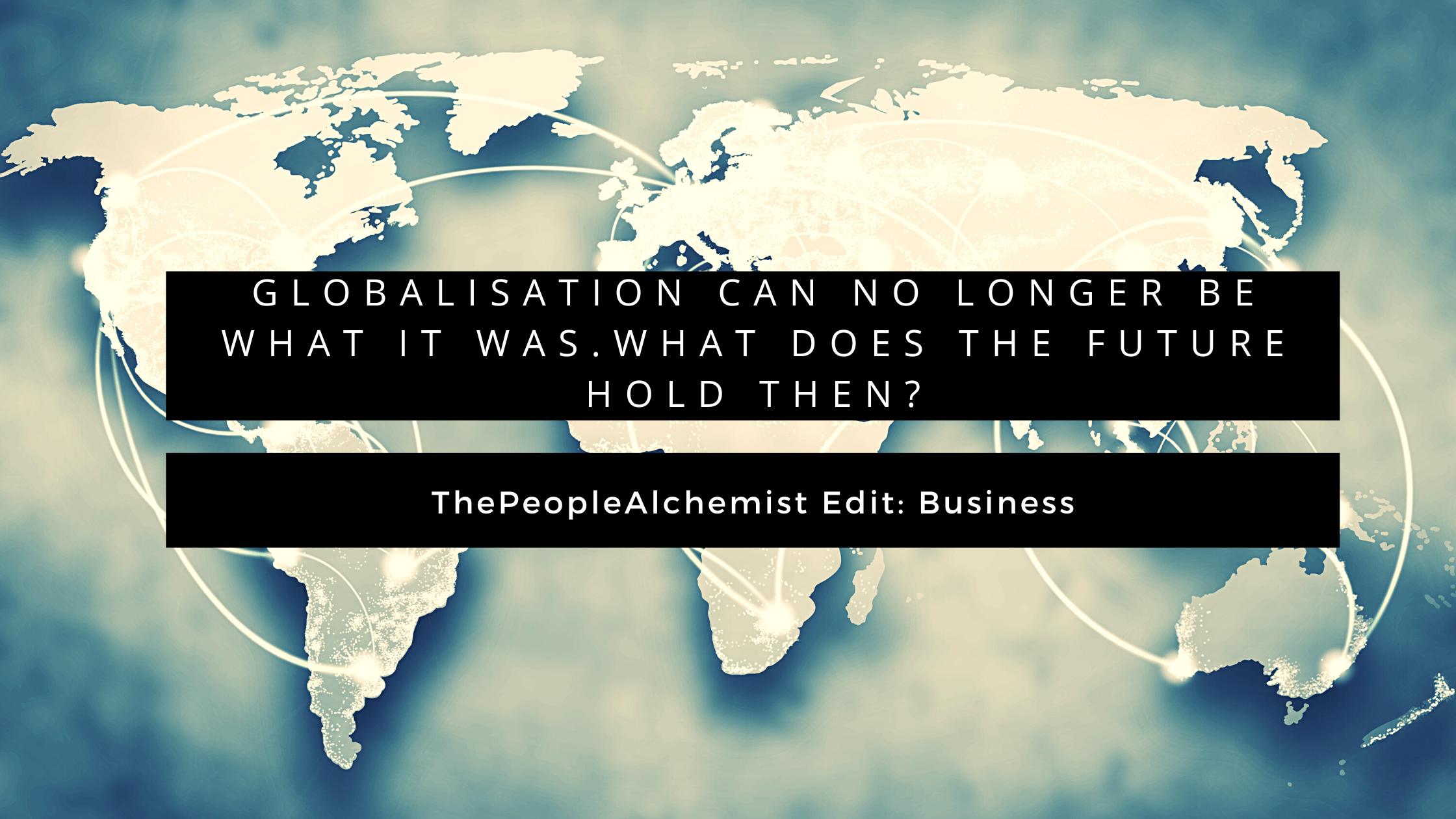 The PeopleAlchemist Edit: change & transformation, business & lifestyle experimentation for TheWomanAlchemist – Globalisation can no longer be what it was

Globalisation is the economic story of the last half-century. The industrial revolution made the world more interconnected regarding people, money, trade and knowledge. And accelerated in the previous few decades by the rise of the internet.

Globalisation means businesses are more likely to have suppliers, customers or colleagues on the other side of the world and have economic fortunes more tied to other countries, which we have all seen so clearly in the last financial crisis. For employers, it means dealing with diversity and flexibility. Companies that embrace and understand different cultures look at things in another way that helps them make the best out of the workforce and better understand their customers, current or future.

NO LONGER AS IT WAS

But after the financial crash, Brexit, a global pandemic and the growth of nationalism, plus a war raging in Ukraine, things might be changing.
Businesses have discovered that barriers and borders can go up and down and that the consequences can be harrowing.

The Russian invasion of Ukraine has ended the globalisation we have experienced, leaving many communities feeling isolated and inward. Thousands of companies have pulled out of Russia while seeking alternative suppliers and customers closer to home. Seeing a country of 145 million people suddenly proclaimed off limits has underlined that globalisation could stall. Or, even worse, reverse.

Some newspapers are saying globalisation per se is ending.

We have yet to see a total deceleration of globalised trade. What is sure, though, is that globalisation can no longer be what it was. However, we can’t entirely blame the war in Ukraine or the pandemic. There are other more everyday factors that are at play.

The world is becoming riskier to do business. Companies’ awareness and attitude toward risk have been growing for a while. Additionally, there is the ongoing tension between China and the US, the world’s two largest economies, looking to escape from their lucrative but politically problematic co-dependency.

The decline or reversal of globalisation may be more of a pragmatic response to a reality where politics are as crucial as economics.

WHAT’S WRONG WITH GLOBALISATION, THEN?

The world is fragmenting. The reality is now shifting toward creating spheres of influence OR globalisation 2.0. Worlds of intra-regional rather than truly global commerce, driven by regional rather than global trade, ‘friendshoring’, as US Treasury secretary J Yellen described. This terminology refers to a partnership of politically aligned nations trading together rather than with other countries that are not politically aligned.

China has also signalled its intent to decouple from the west. Cold war era, anyone?

Globalisation opened up the world with more unrestrained movements of goods and services and access to almost any country and talent. As a result, nearly all countries got richer while global inequality and extreme poverty plummeted in the last century.

But globalisation’s fundamental flaw was that, while the number of middle-class people may have increased in countries such as China and India, it simultaneously fell in the US and UK/Europe. Moreover, traditional labour-intensive occupations moved from west to east.

So even though the impact on the headline GDP of many countries has been positive, the distribution of that wealth has not with dire social consequences. A frictionless global market with fewer winners winning bigger and more losers.

The average wages in the UK continue to be below their pre-crash 2008 levels. By contrast, the number of billionaires globally has grown. The rise of the super-efficient giant globalised multinationals such as Amazon, Facebook and Google mirrored the demise of thousands of jobs in traditional sectors like manufacturing and retail.

We can now buy things that 30 years ago we did not even know or wanted from all over the world. And we can have them delivered in a few clicks. Plus, we can search for and compare the best price on anything.

THE TIDE HAS CHANGED

But the neglect of the local in favour of the global went out of the window with Covid. Lockdown communities worldwide were forced to re-engage with neighbours. Local businesses employing local people with a local story about the origin of what they are providing created a shift in consumer psychology. If this persists, it could have long-lasting effects on business.

Furthermore, globalisation encouraged large companies to pursue efficiency over resilience, making them much more vulnerable. The emphasis being on reducing costs against increased risks.

So now there is a growing realisation that putting all eggs in one basket may no longer be the smartest thing to do. There is a limit to how much companies can rely on outside overseas products, translating into a potential investment back in localisation, which implies we will probably see more British companies producing in Britain (and EU in the EU, US in the US, etc.). A new era of trading blocs commerce is on the horizon.

For me, it has always made sense to diversify, as any good business strategy should. Businesses need to have multiple suppliers rather than relying on one single one, the same as a sales strategy that allows the business to have multiple income streams. If one dries up, you are not in trouble.

As much as I understand and agree with some of the gripes against big giants like Amazon, as a customer, I don’t know what I would have done without Amazon during the pandemic. And from a business perspective, there is a lot that both big and small organisations can learn from Amazon. Big or small companies need to first unlock their strength and simplify systems and processes to weather potential storms, ignite their people, achieve a long-lasting transformation, and deliver for their customers.

Remember, Amazon was not always a giant. It became one. And so can anyone else with the right strategy and execution.

I am digressing now from the main subject; glocalisation can be the way forward.

Globalisation can no longer be what it was, but for sure, there are turnings ahead that lead to some unexpected destinations, recognising that every cloud has a silver lining.

You can get my books here.