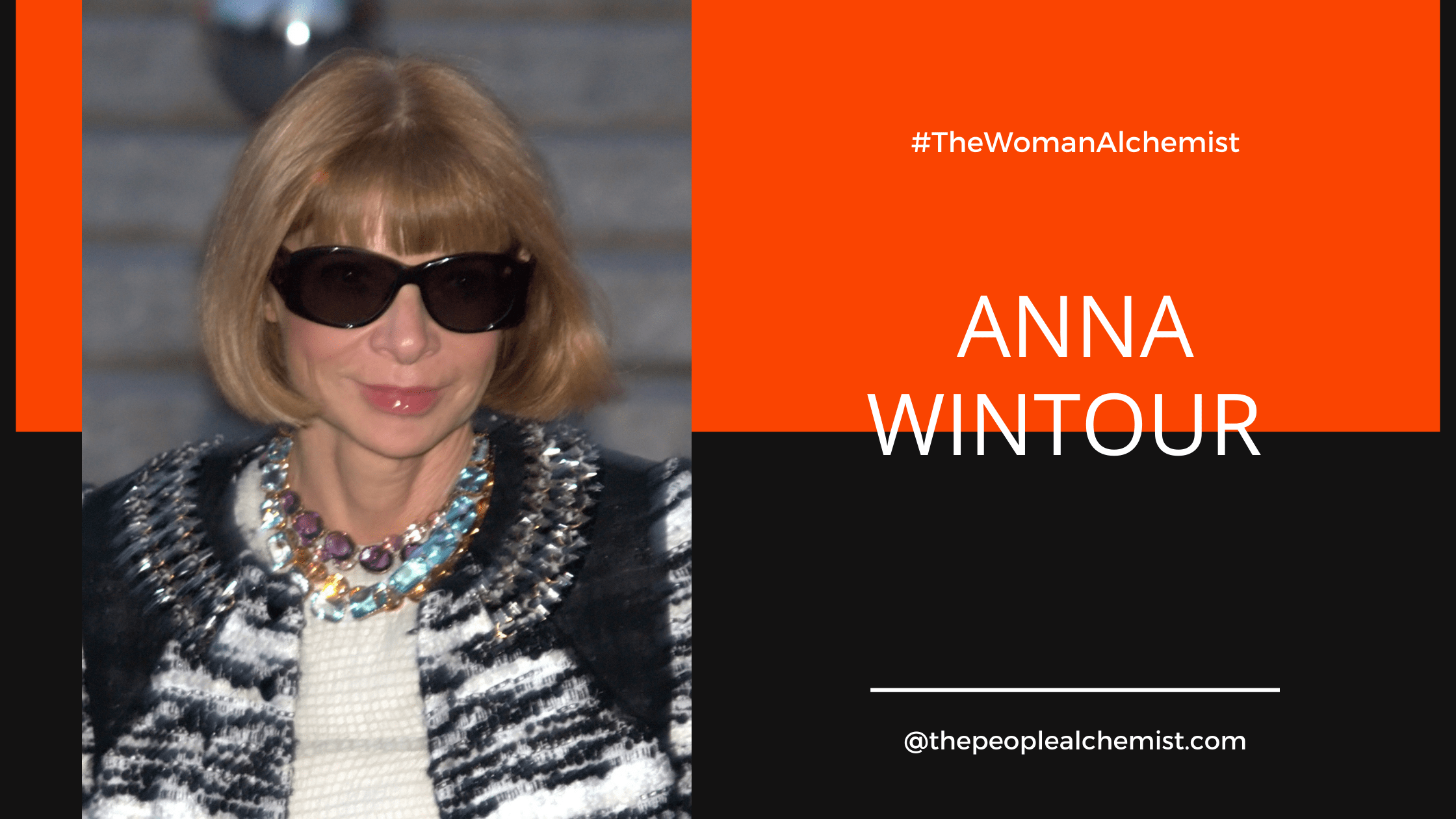 It is month two of my feature monthly blog covering Women in Business who have inspired me.

February #TheWomanAlchemist is Anna Wintour. A great inspiration for me both because she showed the way of what is possible if you really believe and follow your conviction. And because she has helped shape the world of fashion and support/promote many designers I love.

Anna Wintour, editor-in-chief of American Vogue and the artistic director of Condé Nast, is widely regarded as the most influential figure in fashion. Arguably one of the most commercially minded editors ever.

She was born in Hampstead, London, the daughter of an American mother and an English father. Wintour started her career in 1970, working in the fashion department at Harpers & Queen in London. Six years later, she joined Harper’s Bazaar in New York as its Fashion Editor. After a stint as Senior Editor controlling the title’s fashion and lifestyle coverage, Wintour was named Creative Director of American Vogue in 1983. British Vogue hired her back as Editor in Chief for two years. In 1988, she rejoined American Vogue as Editor-in-Chief, which she has held since. She also became Artistic Director of Condé Nast in March 2013. And executed the development and successful launch of Teen Vogue in 2001, serving as Editorial Director for the title.

Wintour is a pioneer who, during her tenure at American Vogue, started the practice of featuring celebrities on the cover. She took the title’s fashion pages out of the studio and onto the street and used Condé Nast’s flagship influence to champion new American designers through the CFDA/Vogue Fashion Fund. Wintour also launched Fashion’s Night Out.

Her first cover, a street shot featuring jeans and Lacroix couture sweater, declared a new chapter in the magazine’s history. Today, US Vogue’s pages are populated by photographers, editors, and designers. Many of these artists have been nurtured and championed by Wintour, providing the magazine with a consistent visual aesthetic.  She also pioneered figures from outside the fashion industry to represent and illustrate her editorial messages.

The New York Times described her as an “in-house consultant for troubled or dated magazines,” the advice of which “can be sought, or delivered.”

Wintour herself said, “Growing up in London in the Sixties, you would have to be walking around with Irving Penn’s sack on your head not to realise that something extraordinary was happening in fashion. The look of the girl then and everything that was going on then, the pill and the emancipation of women and the end of the class system. Just sort of seeing that revolution go on made me love [fashion] from an early age.”
“There’s a new kind of woman out there. She’s interested in business and money. She doesn’t have time to shop anymore. She wants to know what and why and where and how.”

Anna Wintour played an instrumental role in reviving the magazine. She made changes in staffing in the style of cover pictures. And she transformed the publication into a more youthful and receptive one. Focusing on modern perception of style and fashion, targeting a far-reaching audience. Never hesitated to push for new ground that included inducting celebrities instead of supermodels on covers. And introducing a mix of expensive and low-end fashion items during her photoshoots.

Her determination pushed American Vogue to regain its position as the frontrunner beating its competition, accomplishing her goal of restoring the position of ‘Vogue’ in her over two-decade-long career with the magazine.
Wintour has also been actively involved in philanthropic fundraising. She is a New York Metropolitan Museum trustee and has raised funds regularly for its ‘Costume Institute’. Her involvement turned the museum’s annual gala into one of the most important high profile events of the year.

Since 1990 she has raised funds for the ‘AIDS’ charities, she started the CDFA/Vogue fund to aid unknown fashion designers. She also aided in raising funds for the Twin Towers after the terror attack of September 11, 2001.

Some of her awards:

The media rarely focus upon Wintour’s skill and enduring professionalism; her discipline, focus, and the daily regime are legendary. A committed professional through and through, striving for excellence starting from herself.

I know she has been endlessly criticised for being “icy”. However, she certainly has a strong personality. I personally like that.

Additionally, I concur with her not liking people who’ll say yes to everything. She says but wanting people who can argue, disagree, and have a point of view that she can then reflect on in her work ( the magazine).

I understand her love for New York because (quote) ” it is a city for people who want to work. And I love that it is a city where everyone is from somewhere else – so you are not judged by your accent, who your dad was, or any of that ..”.   I feel the same about London  – which I adore.

Designer John Galliano says he owes his entire success to Wintour’s recommendation whilst Karl Lagerfeld, “She is the most famous fashion journalist in the world. And she says what she thinks. That’s why some people think she’s tough.”

Would she had endured the same criticism if she were a man? Doubt it.

“People respond well to those that are sure of what they want”- she has said. And – ” Why fit in when you were born to stand out”.

For me, Anna Wintour is a role model, somebody who inspired me to be myself and to go after what I want, Unapologetically, and that’s why she is #TheWomanAlchemist for February.

And you, my lovely readers, what woman has inspired you to be who you are today?