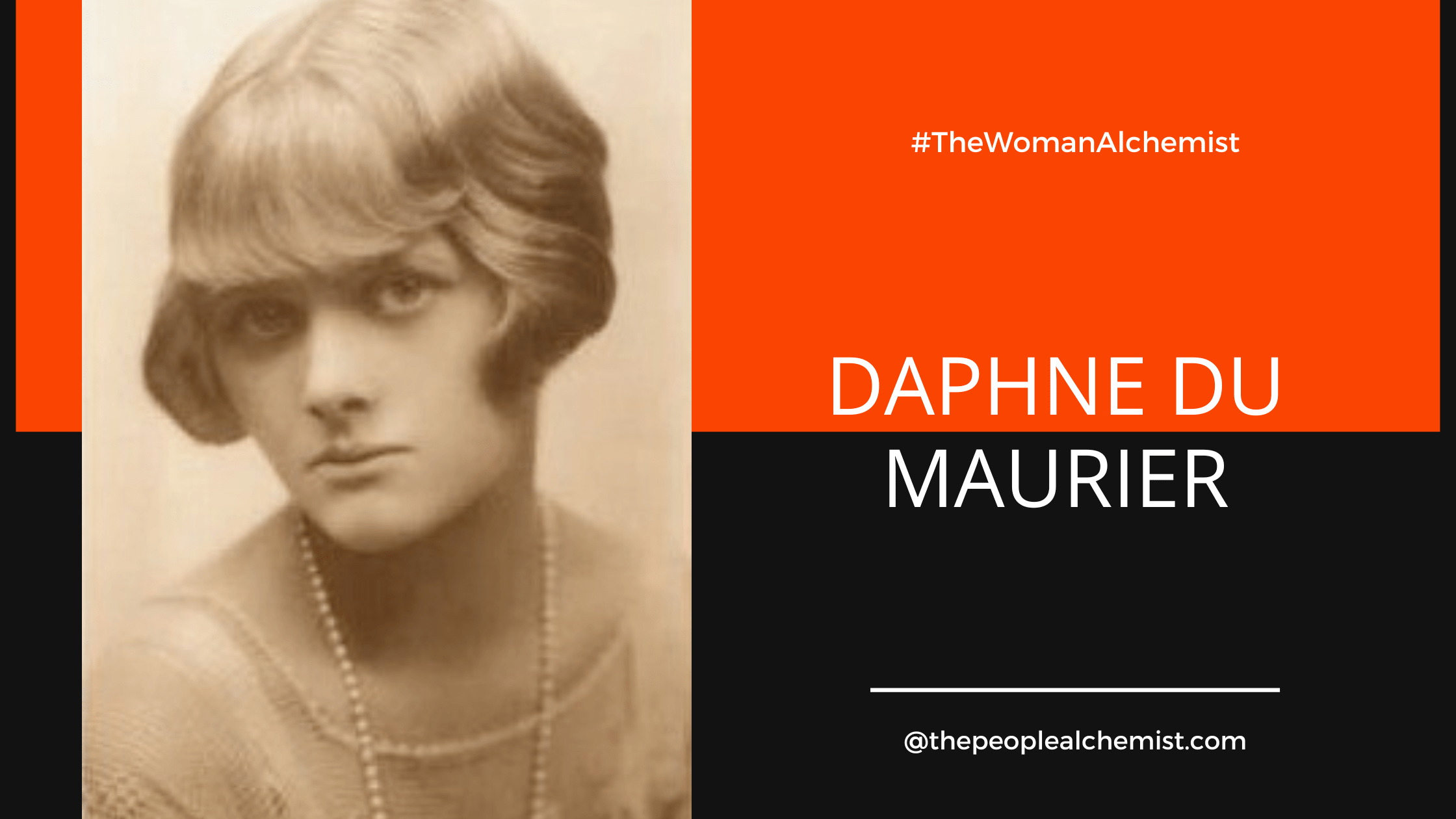 Hello and welcome to another #TheWomanAlchemist monthly feature. My tribute to women writers and their contributions continues with Daphne du Maurier.

Daphne du Maurier was born (13 May 1907) into a creative and successful family and had a privileged upbringing in Hampstead ( London). Her grandfather was George du Maurier (artist and writer). Her parents, Gerald du Maurier and Muriel Beaumont were both famous actors.

Then, in the 1920s, the family bought a holiday home in Cornwall – Ferryside at Bodinnick – which became a place where she could dedicate herself seriously at the beginning of her writing career.

The Loving Spirit was her first novel published in 1931. Her success grew from there. She married Frederick Browning, a military man, and they had three children the year after. She continued to write as Daphne du Maurier (1932–1946), but otherwise, her title was Daphne du Maurier, Lady Browning (posh, I know).

In 1969 she was elevated to the Dame Commander of the British Empire (Dame Daphne du Maurier, Lady Browning, DBE), although she never actually used the title. The legend goes that she told no one about the honour. Even her children learned of it only from the newspapers, which says a lot about her personality and qualities, especially in this day and age.

Daphne du Maurier was misleadingly described as a romantic novelist for a long time. Instead, she wrote dark, often gothic and edgy novels and short stories with unexpected twists or suspenseful endings.

For this reason, her bestselling works were not taken seriously by critics to start with. However, they have since earned her an enduring reputation for the narrative craft. Additionally, many of her works have been successfully adapted into films. There were:

Daphne du Maurier was an excellent storyteller, often thought of as reclusive, even more so as her fame increased. She was perhaps solitary, comfortable with her own company and the make-believe world she lived in. This enabled her to bring us her beautiful novels and short stories. I identify with this. I love solitude too especially when writing. Well, in general, I should say.

There are many aspects of Daphne du Maurier, her life and her writing. Indeed she was a solitary and private person who liked routine and avoiding the complications keeping relationships simple. However, she also helped many people, often in such a quiet way that these acts of kindness and support almost always went undetected.

If you have read Rebecca, one might best explain this by saying Daphne was both Rebecca – brave, strong, loving the outdoors, walking, riding, sailing and so on, and also the second Mrs de Winter – shy, unsure of herself, hiding away.

Rebecca (1938) was, without any doubt, one of her most successful works. It became an immediate hit on publication in 1938, selling nearly 3 million copies and has never gone out of print. The novel also attracted critical acclaim and awards like the National Book Award voted by members of the American Booksellers Association for the favourite novel of 1938. Most recently, Rebecca was listed as number 14 of the “nation’s best-loved novel”s on the BBC’s 2003 survey The Big Read (UK).

In Rebecca, du Maurier found her voice as an author with a tale with great psychological insight and melodrama, twists and turns at every angle, whilst exploring the theme of jealousy which resonated with the readers.

I’ve chosen Du Maurier simply because I love her writing. It doesn’t have to be more complicated than that. And I want to showcase women writers.

So Happy Birthday, Dame Daphne du Maurier (Lady Browning) DBE, Fellow of the Royal Society of Literature. And thank you for your amazing stories.