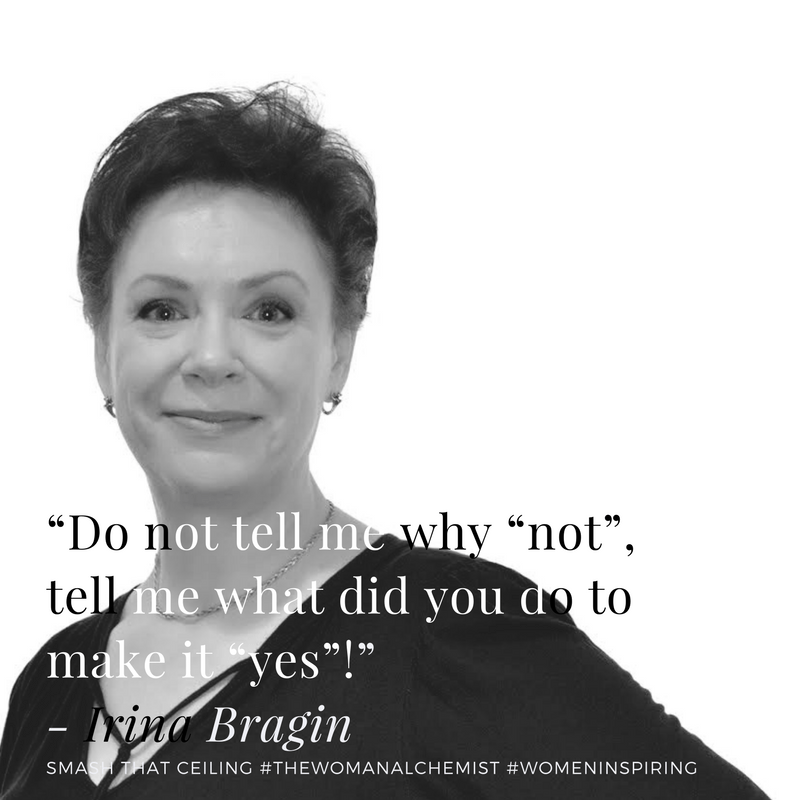 #TheWomanAlchemist #SmashThatCeiling interview series, #womeninspiringwomen giving an insight into successful female leaders/role models and their mindset continues this week with the formidable Irina Bragin, the CEO & Founder of Made of Carpet, Carpet Bags – trendy Renaissance of the 150-year-old Victorian fashion treasure, straight from its homeland – London, England. Irina Bragin is a strong, independent woman with a wicked sense of humour and the capacity of being both very strong and very feminine, either being detrainment to the other, au contraire enhancing each other in her unique combination.

The idea for the beautiful, unique bags at Made of Carpet was inspired by the romantic Victorian Era and influenced by famous English literary characters such as Mary Poppins and Miss Marple. It seems only fair to cover women in fashion this month, considering the #FashionWeek galore happening this month.

The bags are made from the most delicate quality rugs produced in Western Europe, woven from unique synthetic yarn, plushy & soft. Made of Carpet and Irina have been heavily featured in the media like  THE PINK TANK  and has a celebrity following. And without further delay…

This interview is an extract from the book “STOP IT! It is all in your head” available now.

1. When you were a child, what was your dream job and why?

An actress. Sounds silly, I know… It was right until I realized that it is not a profession but innate abilities, and I do not probably have any.

2. Can you tell me when you started to consider yourself successful?

I do not remember feeling unsuccessful. I am a person who almost always goes against the current. Initially, in the beginning, it is always unpleasant and even punishable, but the result is always worth doing as I think is right.

Talking particularly about my fashion brand, the first success came in 2013:

I took part in the Lord Mayor parade. We were the first in the 700-year history of the parade the women-only float “Women in the City and Livery”. In that year, for the second time in history, the woman became the Lord Mayor – Fiona Woolf (our customer).

Made of Carpet was privileged to become one of the sponsors of the charity event “Newsrooms got talent” – performing, singing, and dancing competition of all famous newsreaders from most British news channels.

In 2014 we became a finalist in the Drapers Footwear and Accessories Award.

In 2015 we became an official sponsor of BRIT Award men goodie bags.

This year we became Drapers Award finalists again. This time in the Pure-Player category.

3. I’m sure you have faced adversity like every business/business person: how do you motivate yourself and force yourself through the worst times?

Well… There is one good motto I know “Do not tell me why “not”, tell me what did you do to make it “yes”.

And another:” You do not need to fix 100 people’s lives up. Nor 10, nor even 3. You need to fix it up for just one – yourself. So common! Indeed you have the strength and intelligence for one.”

4. What are the best things about your job?

5. As Tony Robbins says, “Success leaves clues”: what are your daily/weekly habits?

My everyday main motto is “What did you do today for tomorrow?”

6. What do you think is the most significant barrier to female leadership?

Family is the most time and resource consuming. Then most of us do not have a technical brain, and we have to spend twice more time understanding how that piece of iron works. Dependence on the opinions of others about our appearance also does not do any good.

7. What women inspire you and why?

Michele Mone. She is real Phoenix raised from the ashes. Knowing where she was born and bred, she had the slimmest chance to become a brilliant, beautiful, and wealthy businesswoman as she is now.

8. What advice would you give to your 16year old self?

Do not spend time and resources on people and activities you do not need. When you are 16, it is worth it to learn normal healthy cynicism.

Party with friends. It allows getting off the problem and thoughts and, after some time, looking at it from another perspective.

10. And finally, something frivolous: the best thing about being a woman…

We can turn our weakness into strength, we can use situations and people, when they do not take us seriously, we can let ourselves look and behave silly. We almost always have somebody out there who is willing to pay for champagne.