In a world full of Kim Kardshians, Be an Audrey 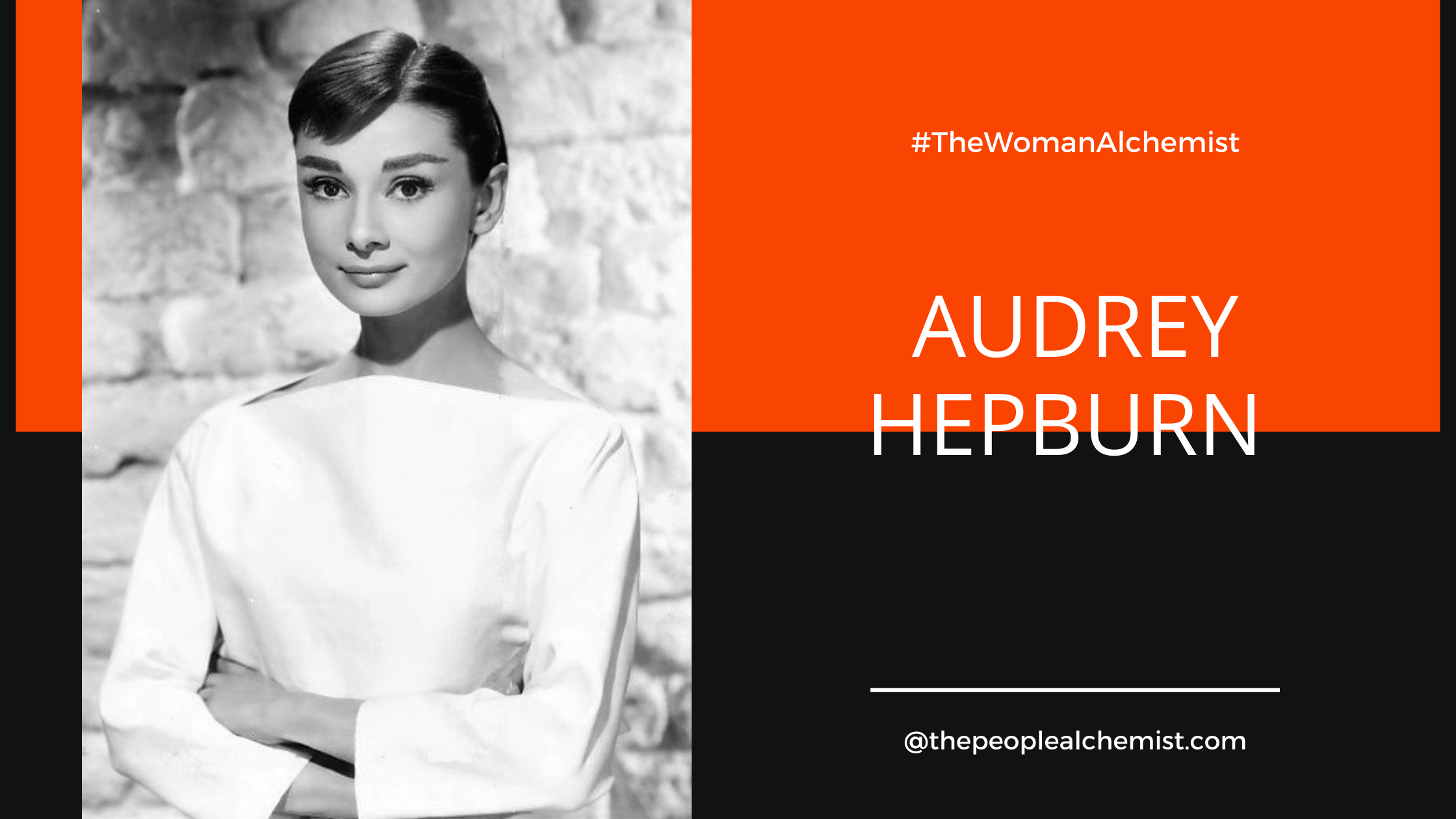 This Thursday, May 4, Audrey Hepburn would have celebrated her 88th birthday, and I cannot think of any other woman that would be more fit to be #TheWomanAlchemist for May.

Again, I know she was not a woman in business or an entrepreneur, true.  She was, however, a woman of substance and style. In today’s world of Kim Kardashians & reality TV stars, I cannot think about a better role model (and quite frankly I’m a bit obsessed with her and the Breakfast at Tiffany movie thing).

Hepburn had a magical screen presence. She was and still is a fashion trendsetter, always displaying impeccable good taste and manners. A tireless campaigner for children’s rights. She is best known for her film roles in Breakfast at Tiffany’s, My Fair Lady, Roman Holiday and Charade. Waif-like, glamorous, combining charm, effervescence, and grace.

Hepburn was born in Brussels to a Dutch mother and an English father. She later attended boarding school in England. Her father left the family when she was only six years old. Probably one of the most traumatic events of her life, as she often quoted, which left her with a perennial need for that paternal affection and stability.

When War II was starting, Hepburn and her mother moved to Holland which was unfortunate as, shortly after they arrived, the Nazis invaded. Winter of 1944-1945 was a challenging year in Holland. Thousands of people suffered starvation, including Hepburn, who was left severely malnourished with acute anaemia and respiratory problems.
She carried a sense of duty and gratitude for having survived all her life.

Her experience during childhood and the war contributed to a maturity way beyond her years. But simultaneously left her in a state of arrested development. Wartime poverty and hunger always remained a present memory, and she always felt the need to work harder. “She didn’t go to work to become a celebrity,” her son Luca Dotti once said, “She went to work to earn money. And that was the spirit she kept all her life.”

AN ICON IS BORN

Hepburn began appearing on the London stage in 1948. Then gradually small parts in films and, in 1951, the lead role in Gigi on Broadway. The next project is what catapulted her into Hollywood and our consciousness: Roman Holiday (1953), for which she won her only Oscar.

This film started her particular look, the flat-chested/gamine, winged eyebrows that made her stand out. This then progressed with Sabrina (1954), where her collaboration with the designer Hubert de Givenchy commenced. Perhaps the beginning of the modern world of celebrities collars. They became close friends, both sharing the same work and life ethic.

Breakfast at Tiffany’s (1961)  is what finally cemented her iconic status.
Truman Capote, the author of the novella the movie is based on, wanted Marilyn Monroe to play the leading role. He thought Monroe was more suited to a sexy and utterly neurotic Holly Golightly, his character.
Paramount wanted Hepburn over Monroe. And this clinched it.

Hepburn’s performance was effervescent. Less controversial that an actual rendition of the novella would have been and more optimistic. Perhaps better suited to the moral pulse of the era. It is, however, the iconic image of Holly herself – the little black dress, black gloves, the multiple strands of pearls, a tiara and a foot-long cigarette holder that has long since transcended the film. You may never have seen Breakfast at Tiffany’s (shame on you), but you have certainly seen pictures of Audrey Hepburn in THAT outfit.

The fact that she didn’t act more frequently in later life might have had something to do with the material offered. Or perhaps it was a choice. Nevertheless, it was a shame since she was a strong actor with both a capacity for comedy but also for serious drama. I loved her performances in The Nun’s Story (1959), Wait Until Dark (1967)and Robin and Marian (1976) with Sean Connery.

Her life calls, though and what gave her the most satisfaction came in 1988 when Hepburn was appointed Goodwill Ambassador for Unicef. She worked hard for it. Constantly informing herself as she understood the power and positive effect her name and presence would have. According to her son Luca Dotti, “her humanitarian awards were displayed proudly in the sitting room whilst her Oscar for Roman Holiday was wedged on a shelf in his playroom’.
After a Unicef trip to Somalia, Hepburn was diagnosed with cancer. She died peacefully surrounded by her family in January 1993. The Audrey Hepburn Children’s Fund continues her legacy.

I strongly believe that she provided and still does a great role model for women. Hepburn never really believed she was beautiful, carrying those insecurities that we as women suffer from time to time. But developed her own unique look.
Audrey knew exactly how she wanted to look. Or what worked best for her. She knew her visage and body. Her best and worse points, and inspired women to dress for themselves: her look was both sophisticated and attainable, European elegance with American easiness. Audrey was an original. She changed the way women dressed and viewed themselves, like Coco Chanel ( another one of my heroes and The Woman Alchemist for January). And she broadened the idea of beauty, of being less blatantly sexy, more wordily and truly modern. A role model for women that was not a reflection of men fantasies, a truly empowering message.

This is more important than ever in an overly and blatantly sexualised world where young women look up to an idealised and photo-shopped reality presented on TV screens and social media.

So in a world of Kim Kardashians, Be Courageous, Do You, Be an Audrey.