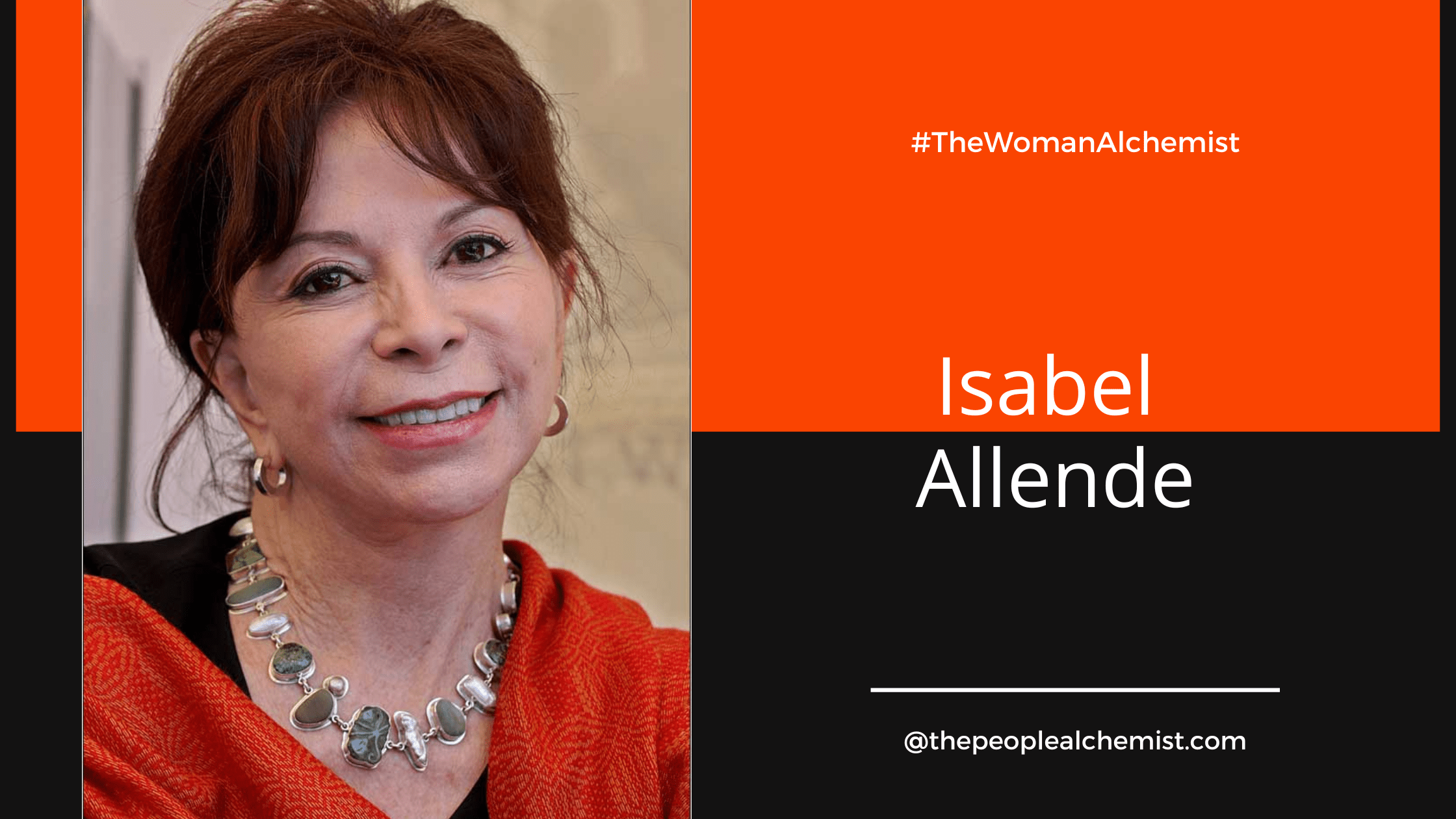 Hello and welcome to the #TheWomanAlchemist monthly feature for August; this month is the turn of Isabel Allende.

Isabel Allende is a Chilean writer, born in Lima on 2 August 1942.

She was the daughter of Tomás Allende, who was at the time a second secretary at the Chilean embassy and a first cousin of Salvador Allende, the President of Chile from 1970 to 1973.

When her father left her mother and Isabel and her two siblings in 1945, the family relocated to Santiago, Chile, where they stayed until 1953, when her mother re-married a diplomat appointed to Bolivia and Beirut.

She met her husband, Miguel Frías while living in Chile and married in 1962. Together they had two children.

Allende worked with the United Nations Food and Agriculture Organization between Santiago, Brussels, and Europe from 1959 to 1965. She also briefly translated romance novels from English to Spanish, from which she was fired because she made unauthorised changes to the dialogue of the heroines, taking a feminist stand.

In 1966, Allende returned to Chile, where her son Nicolás was born.

Her uncle Salvator Allende ascended to power in 1970 but was later overthrown and assassinated in 1973 during a military coup led by General Pinochet.

At the beginning of the Pinochet regime, she was arranging safe passage for people on the “wanted lists” until her mother and stepfather narrowly escaped assassination and when she was added to the list herself. After that, she fled to Venezuela with her family, where she remained for 13 years.

Her debut novel, The House of the Spirits (1982), was written during this time. As per Allende’s admission, her move from Chile made her a writer. She said: “I don’t think I would be a writer if I had stayed in Chile. I would be trapped in the chores, family, and person people expected me to be.”

Being emancipated was not what was expected of her.

Her fiction poignantly reflects her views and her history of oppression and liberation, where women battle against patriarchal ideals.

Allende’s life has been both complex and tumultuous ( divorces, death of her daughter, living in exile following death threats), and her angst and struggles are captured in her books.

She now resides in the United States.

Allende worked firstly as part of the editorial staff of the Paula magazine and the children’s magazine Mampato and then as editor between 1969 to 1974, during which she published two children’s stories and a collection of articles. Additionally, she worked in Chilean television production for channels 7 and 13. Allende once interviewed the poet Pablo Neruda who told her that she should be a novelist rather than a journal and to compile her satirical columns in book form. She followed that advice, and it became her first published book.

In 1973, Allende wrote a play El Embajador which was played in Santiago before she fled the country. During her exile, she continued working as a freelance journalist for El Nacional in Caracas.

In 1981, she received a phone call informing her that her 99-year-old grandfather was dying. Allende wrote him a long heartfelt letter to “keep him alive, at least in spirit.” The letter grew and became, The House of the Spirits (1982). The book, albeit initially rejected by numerous Latin American publishers, soon ran to more than two dozen editions in Spanish and then was translated into many different languages. She was compared to Gabriel García Márquez and associated with magical realism, although her works also show elements of post-Boom literature.

The Los Angeles Times called her “a genius”. Additionally, she has received many international awards and accolades like:

Her work has received not only accolades but also some negative criticism. For example, in an article published in Entre paréntesis, Roberto Bolaño called Allende’s literature anaemic and her “a writing machine, not a writer”.

I totally agree with Allende’s rebuttal, e.g., if you sell many books, you are not a serious writer. It is insulting definitely to the readership, and also, what is a “serious writer”? To me, it sounds like passive-aggressive jealousy. Just saying.

I love how she writes using interweaving her personal experience and historical events with myth and realism whilst paying homage to women’s lives.

Happy Belated Birthday, Isabel, and thank you for all the inspiration you provide.

Let me know who is your favourite woman writer in the comments.

I’ll see you next month with #TheWomanAlchemis feature for September.