Live Always With Sense And Sensibility, Thrive With Persuasion And Some Pride And Prejudice – Jane Austen #TheWomanAlchemist December Monthly Feature 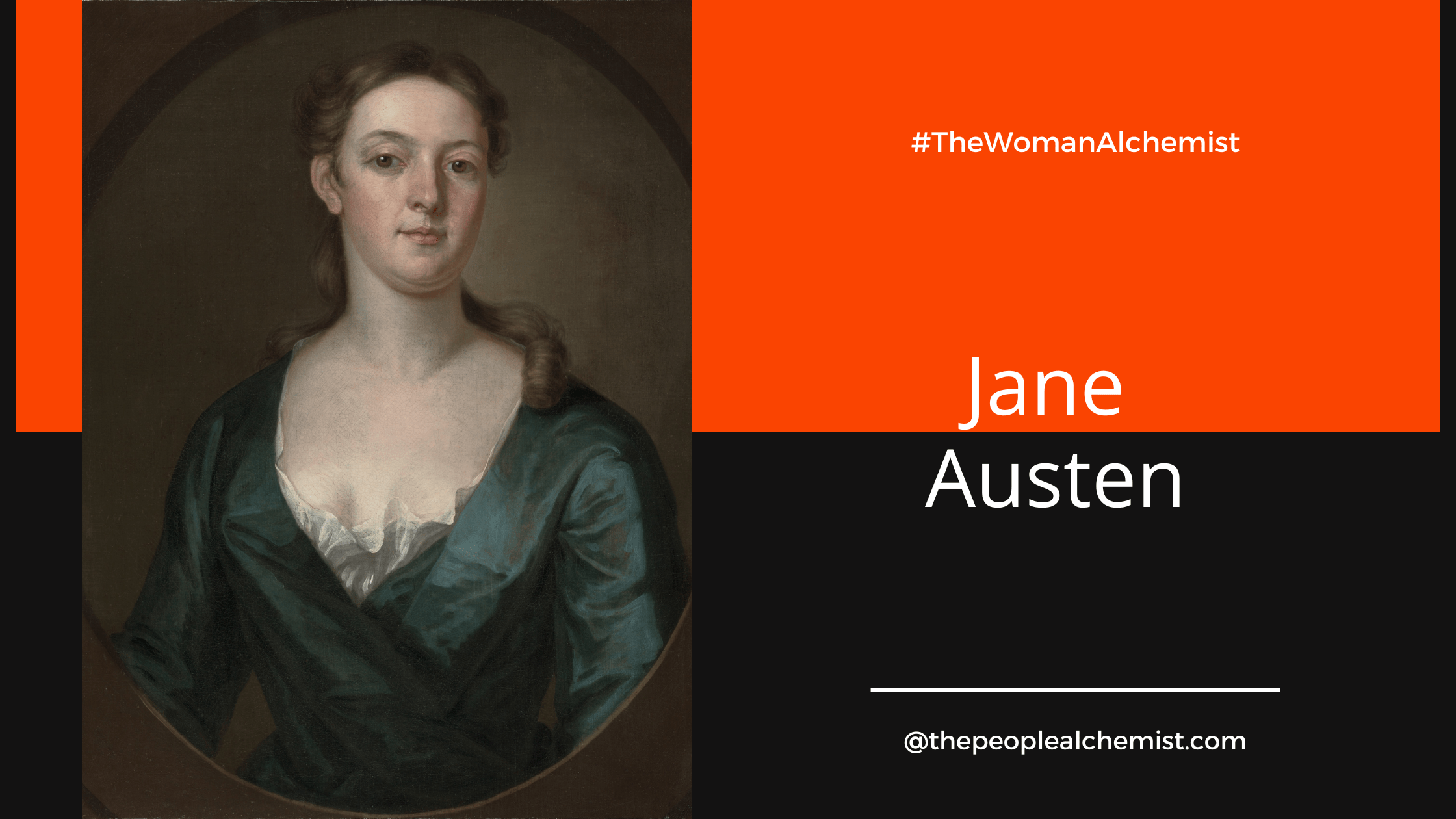 Hello and welcome back to the #TheWomanAlchemist monthly feature for December Jane Austen.

Jane Austen was an English writer who first gave the novel its distinctly modern character through her treatment of ordinary people in everyday life. She vividly depicted middle-class life during early 19th century England. Her novels became timeless classics and are still popular two centuries after her death. For the uninitiated (I’m sure not you, my lovely readers), she was the author of Pride & Prejudice, Sense & Sensibility and Emma, to mention her most famous work.

Jane Austen was born on 16 December 1775 in Hampshire, the seventh child of a family of eight. Her elder sister Cassandra was her closest companion throughout her life. Her father, the Reverend George Austen, was a rector. He encouraged the love of learning in his children. Austen’s affectionate family circle and extensive network provided a stimulating context for her writings.

She used the world of the minor landed gentry, country clergy, the village, the neighbourhood, and the country town when writing her characters and settings. Her life at Steventon rectory was promising for her growth as a novelist. However, this stable environment ended in 1801 when her father retired to Bath.

In 1802 it seemed like she received a marriage proposal which she first accepted and then changed her mind. However, Austen’s novels provide enough evidence of the author’s understanding of the experience of love and love disappointment.

Eventually, in 1809, one of her brothers provided Jane, her mother and her sisters with a large cottage within his Hampshire estate. This prospect gave Austen a renewed sense of purpose. She began preparing two books for publication, Sense and Sensibility and Pride and Prejudice, encouraged by her brother Henry. He acted as a go-between with the publishers.

Sense and Sensibility was published anonymously in November 1811, as Pride and Prejudice (1813), Mansfield Park (1814), and Emma (1815). Her novels were widely read and praised, and their domestic realism was welcomed as a refreshing change from the romantic melodrama in vogue.

She died on 18 July and was buried six days later in Winchester Cathedral.

There was no accurate recognition at the time of her achievements or a grasp of how much of a historian she had been of the emergence of regency society, except Sir Walter Scott’s review of Emma in March 1816, where he complimented this “nameless author” as a gifted champion of “the modern novel” in the new realist tradition.

The theologian Richard Whately wrote one essay after her death, the review of Northanger Abbey and Persuasion in the Quarterly for January 1821.

In her six major works, she created the comedy of manners of middle-class English life, unveiling the possibilities of “domestic” literature. Her duplicated parable of young women’s voyage to self-discovery on the passage from love to marriage focuses upon easily recognisable aspects of life.

The concentration on character and personality and the tensions between the heroines and society relates her novels closely to the modern world. One can find the continuing appeal of her books in their modernity, humour, authenticity, and timelessness of her style and stories so skillfully told.

Sense and Sensibility is the story of the impoverished Dashwood sisters. Marianne, the heroine of “sensibility,” becomes infatuated with the attractive John Willoughby. Initially, he seems to be a romantic lover but is later revealed as a corrupt fortune hunter. He abandons her for an heiress, leaving her to learn “sense” in the form of a loveless marriage with a firm bachelor 20 years her senior. Marianne’s older sister is the guiding light of “sense,” whose perseverance toward her lover is rewarded by her marriage to him after some painful difficulties.

Pride and Prejudice describe the conflict between Elizabeth Bennet, the daughter of a country gentleman, and Fitzwilliam Darcy, a wealthy and noble landowner. It’s the “Pride” of class and wealth and “prejudice” against the inferiority of the Bennet family that keep Darcy unfriendly from the reversed conventions of “first impression”. On the other hand, Elizabeth, the “pride” of self-respect and the “prejudice” against Darcy’s snobbery, holds and fires Elizabeth. But, in the end, they understand each other and realise their love. Elizabeth was Jane Austen’s favourite heroine and one of the most fascinating in English literature. This is my favourite book, and Elizabeth and Darcy are one of my favourite couples ( together with their exchanges).

Northanger Abbey is a mix of mockery of conventional novels of courteous society with Gothic tales of terror.

Catherine Morland is the innocent abroad who gains worldly wisdom and learns not to view the world through her reading of Gothic thrillers. Her mentor and guide are the self-assured and gently ironic Henry Tilney, her husband-to-be.

Mansfield Park is the deepest of Austen’s novels in its tone and dialogue of religion and religious duty. Fanny Price, the heroine, is a self-effacing cousin cared for by the Bertram family in their country house. Her moral strength eventually wins her complete acceptance in the Bertram family and marriage.

Emma is the most consistently comic novel in tone. It revolves around Emma Woodhouse, a wealthy, pretty, self-satisfied young woman who satisfies herself with meddling and unsuccessful stabs at matchmaking among her friends and neighbours. After a series of humiliating blunders, a chastened Emma encounters her fate marrying the mature and protective George Knightley, her mentor and longtime friend.

Persuasion is the story of a second chance reawakening romance between Anne Elliot and Captain Frederick Wentworth. They had persuaded her not to marry Wentworth seven years earlier. Still, when he returned from the war with money and naval rank, he became a suitable suitor acceptable to Anne’s pretentious father and his circle. Moreover, Anne realises the continuing strength of her love for him.

Austen’s books have been adapted both for film and television, as follows, to name just a few:

Jane Austen has left an enduring legacy as the mother of the modern English novel and compelling female characters. The Jane Austen Centre in Bath hosts an annual Jane Austen Festival and, celebrating all things Austen, the Jane Austen Day,  a worldwide, social-networked event on her birthday, 16 December.

I fell in love with Austen’s Pride and Prejudice and have continued this love affair since then. I hope this year you will discover this amazing writer and get to love her as much as I do if you don’t already.