Joanna Penn is an Award-nominated, New York Times and USA Today bestselling thriller author as J.F.Penn and writing non-fiction for authors. She is an independent (indie) author who has written over 30 books and sold over 600,000 books in 162 countries and six languages. Plus, she is also an international professional speaker and award-winning creative entrepreneur and podcaster.

Besides being a great author and entrepreneur, Joanna is one of my virtual role models. So her journey particularly resonates with me.

She had a long career as a business IT consultant in large corporates across Europe and the Asia Pacific before becoming a full-time author-entrepreneur in September 2011. I’m learning a lot from her. Her non-fiction books for author and her fantastic podcast (The Creative Penn Podcast ) on the business of being an author are a gold mine as I’m making my transition in between business models. As you know, I, too, started my author journey after a long successful career in corporate.

Joanna is a prolific writer. She published her first thriller novel Pentecost, later republished as Stone of Fire, in February 2011. She blogged her journey along the way too. Call it Deja Vu as it is the same thing I did when I published my first book, STOP IT!.

There are now 11 books in the ARKANE action-adventure thriller series, described by readers as ‘Dan Brown meets Lara Croft.’ She then wrote a series of short stories (2013) based on Dante’s Inferno for Kobo’s Descent contest. A promo for Dan Brown’s Inferno launch. The series is now available as A Thousand Fiendish Angels.

Also, in 2013, she launched Desecration, the first in the Brooke and Daniel Psychological Crime Thriller series, which debuted in the Amazon US Bestseller Crime list alongside Michael Connelly.

In 2014 she became a New York Times and the USA Today bestselling author as part of ‘Deadly Dozen,’ a box-set with The Twelve thriller and mystery authors. In 2016, she hit the USA Today bestseller list with her own ARKANE trilogy box-set. And in July 2017, her novel Destroyer of Worlds was a Finalist in the International Thriller Writer Award for Best Ebook Original.

As I now have published my first novel, Gabrielle, I hope to follow her very successful path by implementing many of her tips, her blueprint for success.

Sorry, I understand I have been totally girl crushing here, can’t help it  this time x 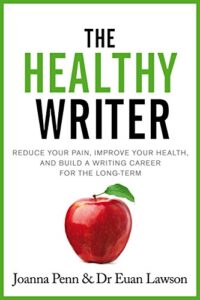 If you want a long term career as a writer, you need to look after your body in the process.

This book has all the tips you need to manage your writing life whilst keeping healthy.