Josephine Baker: did the Banana skirt start it all? 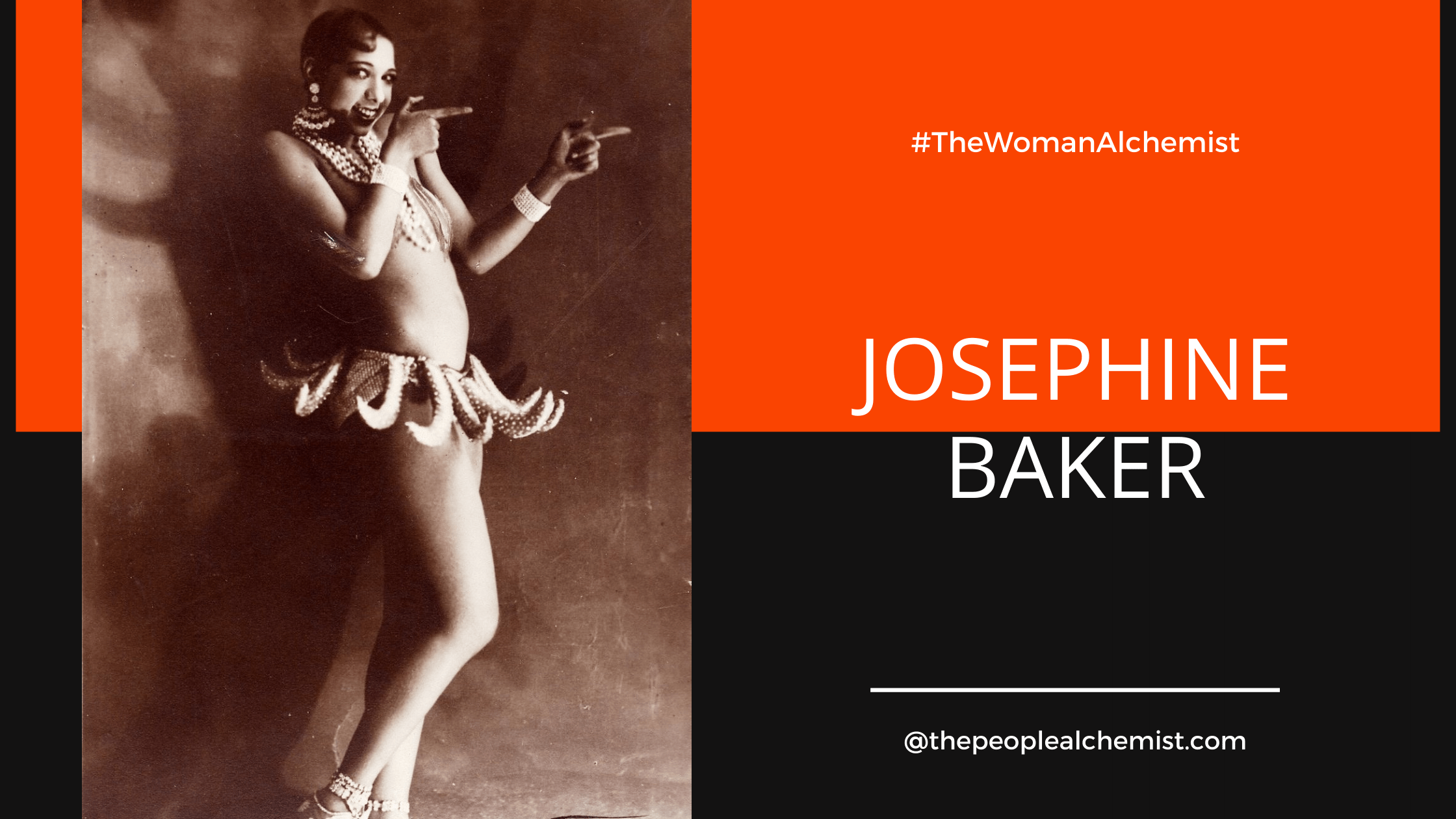 #TheWomanAlchemist for June is Josephine Baker, a mini obsession of mine. I can hear you saying: Laura, really?? What has “La Baker”, a dancer and singer who became popular in France during the 1920s,  got to do with women in business and role modelling?

Josephine Baker was born Josephine McDonald in 1906 St. Louis, Missouri – USA, in complete poverty from a dysfunctional family. At the age of eight, she was hired out to a white woman as a maid, ended up living on the street and then witnessed the cruel East St. Louis race riot of 1917, age 11.

By 1921 – age 15 – she has already been married twice. She took her second husband, Will Baker’s name, as her own. Uneducated /illiterate, a woman, and black when being just one of those two was a major hindrance. But this woman was a survivor and had dreams. And she didn’t believe that she was inferior to others and didn’t put limitations on herself.
In 1922 Baker joined the chorus line of the touring show Shuffle Along in Boston. After which New York City for the Chocolate Dandies (at the Cotton Club) and then the floorshow at the Plantation Club in Harlem with Ethel Waters. Her innate gift for dance, comic timing and love of entertaining ensured she gained a lot of attention from the audience.

Baker then made her way to Paris, her first job being in “La Revue Negre“, performing with other African Americans, including jazz star Sidney Bechet. She introduced “le jazz hot” to Paris, quickly rising to fame thanks to the French intoxication for American jazz and exotic nudity. A favourite and muse to artists and intellectuals like Pablo Picasso and Ernest Hemingway. However, her next job at the Folies Bergere was where she became a sensation, dancing naked but for a string of rubber bananas around her waist, the ‘jungle banana” dance/skirt.
Banana clad Josephine dolls were selling everywhere fast, and other products like Bakerfix, a hair pomade inspired by how Josephine was wearing her hair. Magazine covers and posters added to her fame. By 1936 Baker was one of the highest-paid performers in the world. Oh, and she educated herself and ended up speaking several languages.

But that is not it: this is a woman with courage. When World War II reached her adopted France, Baker didn’t simply run and move to another country. Oh, non – she did her part and worked for the French Resistance using her fame to become the perfect spy.
When touring across Europe, Baker carried for her shows large quantities of sheet music that had secret messages written on it in invisible ink. She also smuggled secret photos of German military installations pinning them to her underwear. She rose to the rank of lieutenant in the Free French Air Force. Post-war, she received both the Croix de Guerre and the Medal of the Resistance in 1946.
In 1961 Baker was also awarded the Legion of Honor, France’s highest award.

During the 1950s and ’60s, she devoted herself to fighting segregation and racism in the United States.

Baker wanted to provide an example for the rest of the world to follow to fight racism. So in the 1950s started adopting orphans from all over the world and continued to do so until she had assembled a family of 12 children from a variety of countries and ethnicities, “the Rainbow Tribe.”What she did was truly remarkable especially considering the times. No one had ever seen a black woman adopt a white child before or a black woman adopts 12 children. Even less raise them in a castle in southwest France. Instead, she raised the children like brothers whilst respecting their individual culture. In an interview with Le Monde, she said: “I will make every effort so that each shows the utmost respect for the opinions and beliefs of the other,” Baker claimed. “I want to show people of colour that not all whites are cruel and mean. I will prove that human beings can respect each other if given a chance.”

In 1963, after avoiding the United States for years, Baker returned to attend the civil rights march in Washington, D.C. In the same year, she performed in Manhattan to sing, dance, and “fight bias”.When she died in 1975,  she received full French military honours at her funeral at l’église de la Madeleine in Paris, the only American-born woman ever.

A #WOMANALCHEMIST TRUE AND TRUE

Make no mistake, Josephine Baker was not a saint by any standards. I’m not glossing over this; she started her career as a highly sexualised celebrity and partly used her race and people’s fascination with it to lure white audiences to get rich fast and become a superstar.
Some accused her of using the children as “walking, talking and sometimes costumed icons of racial typecasting”, an instrument in her war against racism and prejudice.

For me, Josephine Baker is an example of making the most of your circumstances with the tools you have available, with the knowledge you have. And grabbing the opportunities that life presents without using excuses of why you can’t. She is an example that the only thing standing between you and your goals is the stories you tell yourself about why you can’t achieve them.

“You have to be open to using your gift/s, to embrace the opportunities and change your life” – Steve Harvey – Act Like A Success, Think Like A Success.

What are the excuses you tell yourself of why you have not/are not achieving your dreams?
STOP IT – NO EXCUSES.