Margaret Thatcher: Love or Hate Her , You Cannot Forget Her 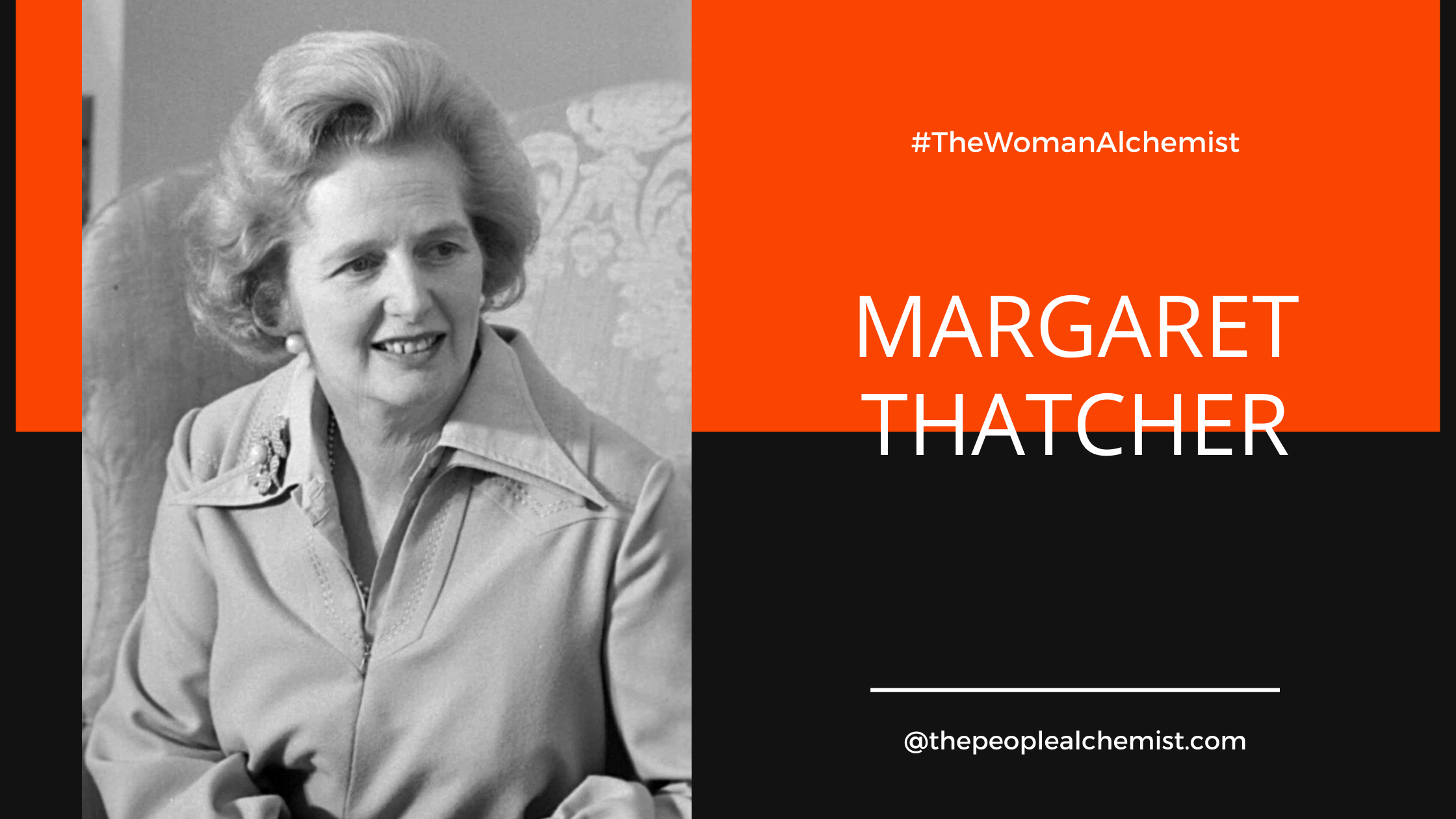 “We have not… rolled back the frontiers of the state in Britain, only to see them re-imposed at a European level with a European super-state….”

Margaret Thatcher‘s speech to the College of Europe – “The Bruges Speech” (20 September 1988).

Baroness Margaret Thatcher is #TheWomanAlchemist for April. I thought it would be appropriate for this month both as tribute/reflection  (she died 8 April 2013) and at this momentous time in UK history.

This woman has inspired me beyond belief. Yes, I know she was a controversial figure, hated by many and adored by others. And yes, she made mistakes. But, you are born to make some if you are a leader and follow your beliefs.

So why is she one of my true heroes?

LOVE HER OR HATE HER, CANNOT FORGET HER

From a grocer’s daughter to the First UK Female Prime Minister, she achieved this without female’s only party lists, fulfilling someone’s quota. She worked hard, researched and prepared for every meeting. Had the courage of her convictions. She wasn’t like one of today’s politicians driven by opinion polls, changing their stand and direction every time the wind changes to ensure their popularity.

Sure, she wasn’t a girl’s girl but a role model nevertheless, an example that I could do what I wanted if I set my mind to it and worked for it. No need to put a limit. She:

Thatcher portrayed herself as a practical housewife who could sort out the nation’s finances with a simple message: “Labour isn’t working.” Kind of sounds familiar, doesn’t it?

As a prime minister, she had a challenging job to do. She promised to curb the power of the unions and bring stability to the country while championing free markets and arguing that individuals should be given the power to make their own success.

In April 1982, Argentina invaded the British-ruled Falkland Islands. Thatcher was adamant that Britain would not give in to foreign aggression. After 10 weeks of fighting, the islands were retaken.

This resulted in her popularity soaring with the public. And she gained respect and strength abroad.

Her ideas of individualism and personal responsibility captured the public and my imagination. I was a child at the time, and I remember thinking, “this is a woman with balls”. Because I believe in individual self-determination.

Thatcher presided over the deregulation of financial institutions in the City. As a consequence, the economy boomed, with London becoming a massive financial centre. Millions of people benefit from being able to buy their own council house and step into the property ladder.

In 1984, there was another defining moment, Thatcher surviving the IRA bombing of her hotel at the Conservative Party Conference in Brighton. She stood defiant and insisted that the conference should carry on. And then condemned the bombers in her conference speech.

“This attack has failed. All attempts to destroy democracy by terrorism will fail.” Thatcher’s speech to the 1984 Tory Party Conference.

Yet later, she compromised and played an important part in the 1985 Anglo-Irish Peace agreement.

Love her or hate her, she was a political phenomenon. Firstly, the first woman elected to lead a major western power. Secondly,  the longest-serving British prime minister for 150 years. And the most dominant force in British politics in the second half of the 20th century.

Finally, Margaret Thatcher was also a global figure, almost a star in the US. And a heroine in the former Soviet republics of central Europe, a point of reference for politicians in France, Germany, Italy, and Spain.

If this is not a role model, I don’t know what is.