Queen Elizabeth II, The Enduring Lesson in Leadership From Her Majesty The Queen, A Feminist Icon – #TheWomanAlchemist October Monthly Feature 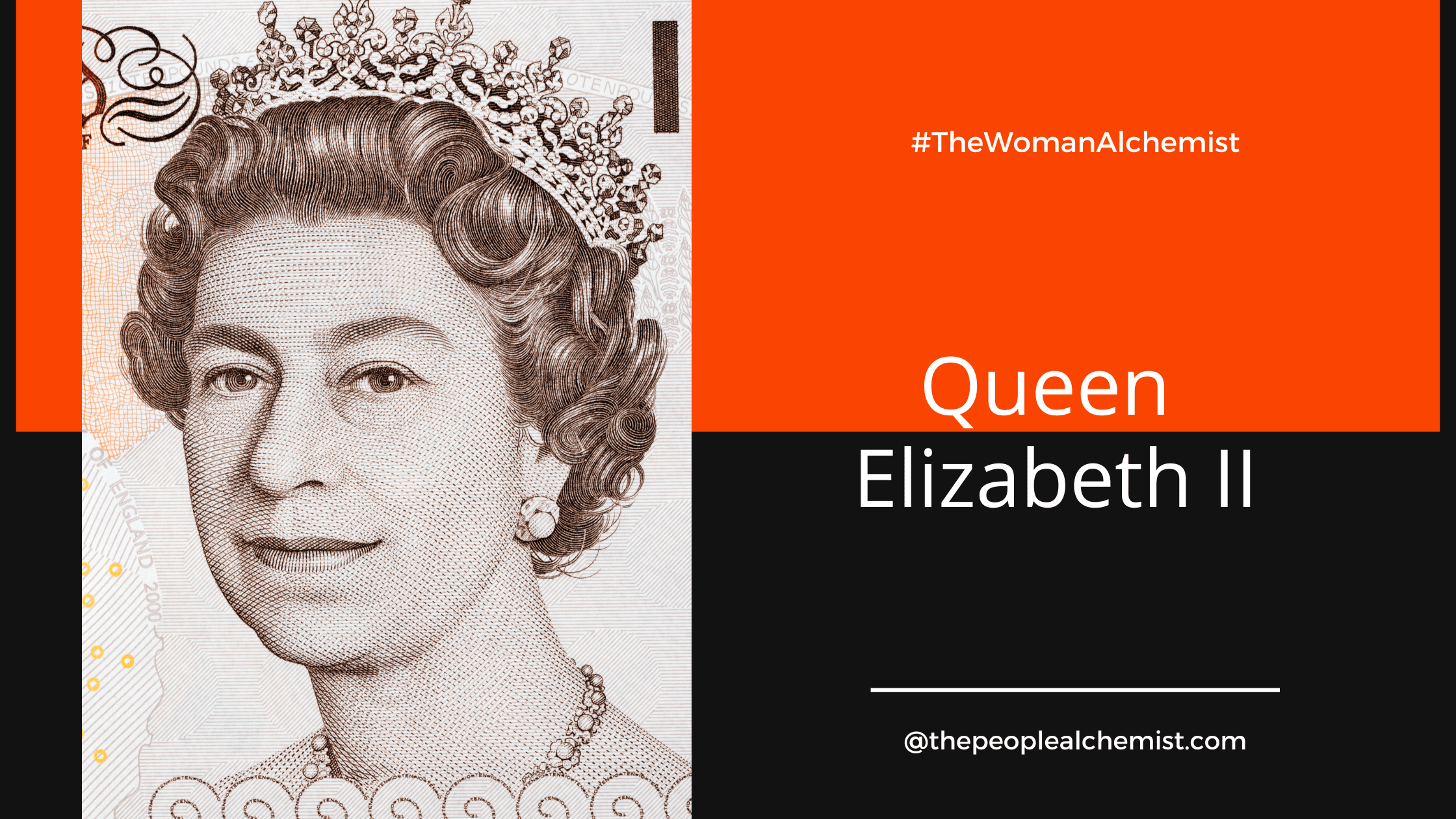 Hello and welcome to the #TheWomanAlchemist monthly feature for October. This month I want to deviate from celebrating women writers’ lives and achievements but instead reflect on Her Majesty The Queen’s enduring leadership lesson. After all, #TheWomanAlchemist monthly blog is all about women inspiring other women and, quite frankly. I cannot think about anybody more inspiring right now.

Queen Elizabeth was revered not for her wealth, title or fame but for her incredible leadership skills. She reigned for an impressive 70 years, which we celebrated only a few months ago. Generations have known no other monarch and now reached the end of the Elizabethan era. Her stabilising and reassuring presence presided over significant events of the 21st Century, including the COVID-19 pandemic.

What are her enduring lessons in Leadership?

1) She was a principled leader

The Queen was a devoted Christian and firmly believed her title was conferred upon her through God.  Moreover, she was a principled leader and believed in her purpose, which she declared to the world.

“To devote my life whether it be short or long to the service of my people”.

This ingrained belief in her purpose meant she trusted herself to make the right decisions. She did so with fairness, love and understanding. Her confidence in her purpose also gave her the mental discipline to make the hard, unpopular choices because she believed she was doing the right thing. Even when it was difficult.

As a result, the Queen was a trusted leader – people understood there was no personal agenda behind her decision other than to serve her country. And She was consistent in her approach.

2) She balanced old and new

Queen Elizabeth provided a consistent leadership style that helped millions; she remained positive and hopeful throughout challenging world and local events, despite sometimes very public personal difficulties. She worked tirelessly every day of her reign, whether in good or bad times.

Part of her success was that she embraced old and new skillfully, simultaneously providing continuity whilst embracing change, balancing being the head of a traditional monarchy with many rules and rituals while still steering progress.

Balancing old with new, traditions and progress is a critically important lesson for any leader, especially today in this ever-changing world.

3) She was a unifying force

Both Republicans and royalists alike respected Queen Elizabeth. She unified everyone together.

In May 2011, for example, she visited what is now the Republic of Ireland, the first visit by a British monarch for over a Century and the culmination of the Good Friday Agreement of 1998, restoring home rule to Northern Ireland and ending decades of bloody conflict, despite any personal feeling. I am referring to the assassination of Lord Mountbatten by the Irish Republican Army in 1979.

Nevertheless, she was determined to make the trip, mainly motivated by her Christian faith and duty to reconcile the alienated, to be a healer of the rift.

“You have to be seen to be believed.”, she said.

Queen Elizabeth made a point to be seen by her people: she was the most travelled monarch in history. She shook the hands of millions of people, always showing curiosity and interest in each person she met.

Visible Leadership is paramount in any company, small or big. Connecting and listening to employees, customers, and suppliers is even more so if you are the company’s brand.

In her visits to African countries, she often wore gold (yellow) and green when visiting Africa — colours that appeared in many African flags after independence from colonial rule, including that of Britain.

In 2011, during the above-mentioned visit to Ireland, she stepped off the plane in an emerald green coat. This nod to her neighbour was as powerful a message as making the trip. And at the evening dinner, she wore a striking white dress adorned with 2,091 hand-sewn silk shamrocks.

Your brand is not just your company logo or what you say you are. It is everything you do, how you do it and how you present yourself.

All must be consistent with the messaging you send to your employees/colleagues/boss/customers or suppliers.

If you, for example, are in the process of starting a consultation process to cut costs/positions, you can’t go in looking ‘flash’.

5) She acted quickly on sensitive issues

The Queen had to deal with many complex issues in her family and Commonwealth, and she learnt that the best way to deal with them was to act quickly.

Albeit she tried to balance supporting her children and grandchildren with doing the right thing by her country, the country always came first. This sometimes meant she had to mediate awkward issues within her family to reduce public negativity, like the then Princes Charles and Diana divorce and, most recently, the Duke and Duchess of Sussex stepping back from the royal family.

The Queen understood the importance of acting quickly in times of crisis and the necessity of giving others the autonomy to make decisions where possible. She never overstepped the mark or persuaded others to follow her agenda.

Another example is when Australia was voting on whether to remain part of the monarchy or not in 1999. The Queen supported the Australians’ right to independence if they so wished.

As the leader of a company, or if you want to become one, you need to be able to lead in times of crisis and resolve issues quickly.

6) She built a great team around her

Queen Elizabeth built an extensive support network behind her, together with a smaller, close-knit group of people that understood her position and gave her the support she needed. She carefully chose who she let into her life, protecting her time and Leadership.

Choosing the right team to support you as a leader is a critical task.

7) She was unapologetically female (and a feminist icon)

The Queen was never a “declared” feminist, and some people might even smile at what I am saying.

I mean that she never purported to be someone she wasn’t and ruled like a King – she didn’t try to dominate conversations, exerting the power of her position or making her physical presence felt.

She was a young female leader in a male-dominated world, forging her way to lead by providing love, guidance, dignity, understanding and respect, even though these feminine leadership qualities were not admired in a leader at the time.

Even before when she was a Princess, she was a trailblazer: she was the first female member of the Royal Family to join the Armed Services in the Auxiliary Territorial Service (ATS), where she learned to drive heavy Army vehicles, mechanics theory and map reading, and to service and maintain a fleet of vehicles.

And as Queen, she changed the course of history for women by creating an equal place for women, for example, by ensuring her daughter had an equal and full education to her sons and, breaking with tradition, keeping her surname when she married Prince Philip.

Most significantly, in 2013, she supported and gave royal assent to the Succession To The Crown Act. The Act allows both sons and daughters of any future UK monarch to have equal rights and access to the throne.

If you think about it, Queen Elizabeth II herself could only succeed her father because he had only daughters and no sons.

Queen Elizabeth also showed us that listening and connecting with others and making them feel seen and accepted, even when their beliefs differ from ours, pays dividends.

She did so consistently and gave people a fair hearing putting people’s needs above hers, including her family.

This quality is directly applicable to both life and work at any level. For example, listening and hearing what people say to you, being an employee, a colleague, a customer, or a supplier, makes business.

In summary, for me, the most enduring lessons in Leadership from Her Majesty Queen Elizabeth II are simple: work ethic, discipline and purpose.

RIP Queen Elizabeth II, and thank you for your service and example.