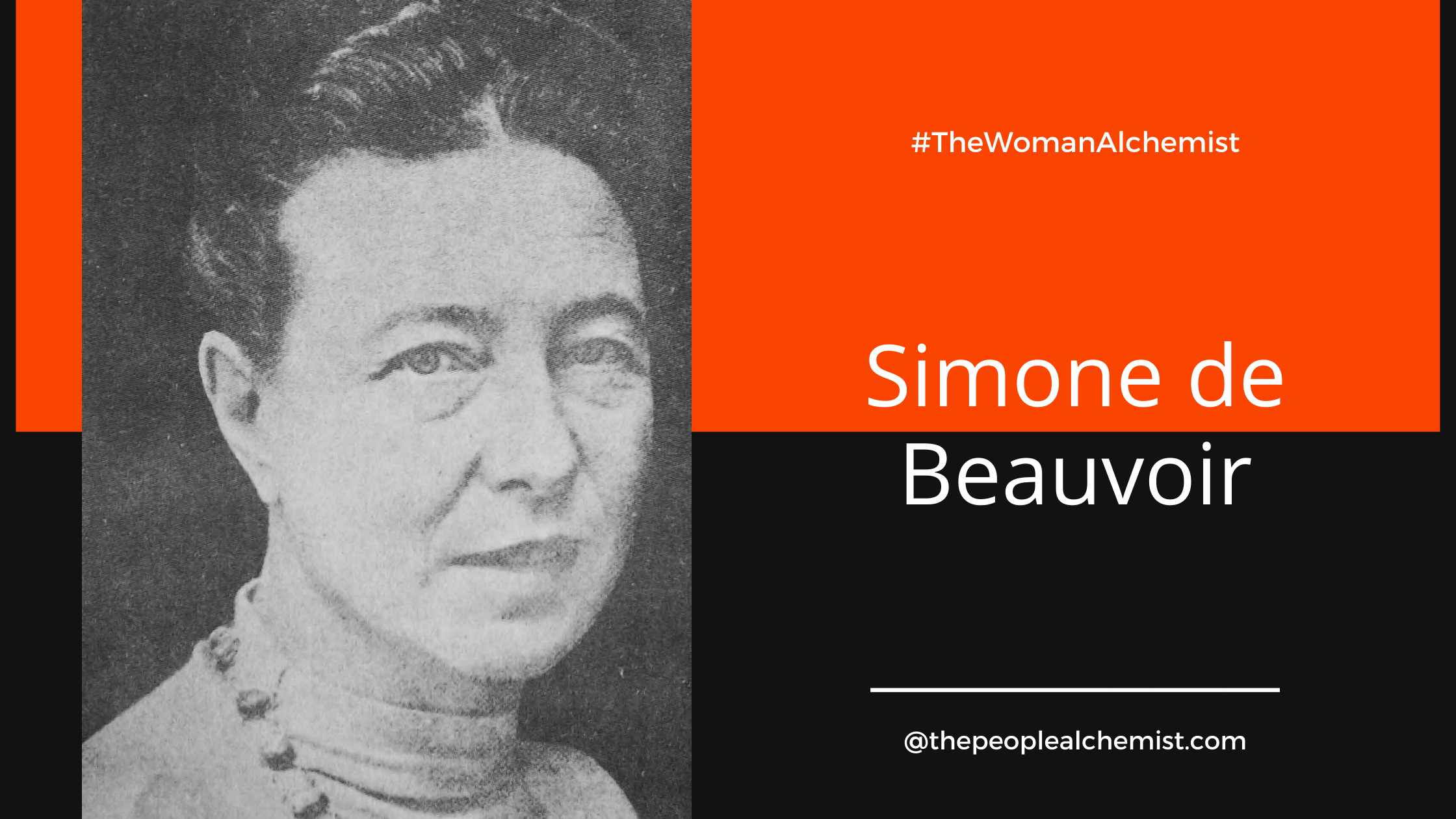 Hello and welcome to the 1st #TheWomanAlchemist monthly feature for this year, shining a spotlight on Simone de Beauvoir, one of my favourite writers of all time.

Simone de Beauvoir was a feminist theorist, controversial from the beginning, challenging social, political and religious categories to justify women’s inferior status. De Beauvoir was a pioneer who embedded phenomenological-existential arguments in her literary works. She was born at the beginning of 1908. By the time of her death (1986), she was honoured as a crucial figure in the struggle for women’s rights. And recognised as an eminent writer, having won the Prix Goncourt, the prestigious French literary award. TheWomanAlchemist embodied.

De Beauvoir was also known as the life-long companion of Jean-Paul Sartre. She was active in the French intellectual scene all of her life. Additionally, she played a central role in contemporary philosophical debates. Both as an author of philosophical essays, novels, plays, memoirs, travel diaries, and newspaper articles, and as an editor of Les Temps Modernes.

When I first read The Second Sex (my favourite of hers), I was fascinated by Simone de Beauvoir’s terrifyingly and vivid account of how one is not so much born but instead becomes a woman. Somehow de Beauvoir is one of those artists/thinkers that has stayed with me since. And not only in her many books.

In a way, the very way her life unfolded gave me permission to think and be an actor in the public sphere, and specifically writing across genres – fiction, non-fiction and memoir whilst being a change agent for women.

She Came to Stay

She Came to Stay was de Beauvoir’s first novel exploring the issue of sexual jealousy. At the centre is the triangle between an older woman, a younger attractive woman she befriends, and her partner who falls in love with the younger woman. The shocking finale almost catapults one into genre fiction (if I were you, I’d get it right now).

This is THE book that set up the agenda for the women’s movement in modern times. The Second Sex by Simone de Beauvoir was first published in 1949 and became a runaway success, selling 20,000 copies in its first week alone. The book caused outrage and scandal and earned its author both notoriety and admiration. Surprise, surprise, the book was on the Papal black list.

It was the first time that the case for female liberty was argued so strongly and successfully. De Beauvoir’s belief that ‘One is not born, but rather becomes, woman’ switched on light bulbs in the heads of a generation of women and began a fight for women’s equality and economic independence, changing perceptions of women forever.

The Second Sex provides a comprehensive and sometimes shocking account of a woman’s condition as ‘other’ in a world dominated by men descriptions and power. There are many incredible sections, and you’ll need to choose your favourites. Mine are where de Beauvoir describes the young girl, sexual initiation, marriage, the narcissist and the woman in love.

The Mandarins won the prestigious Prix Goncourt. It is a novel transporting us into the heart of the left bank during what has now become its mythical post-war epoch. Both Camus and Sartre appear, loosely veiled, as do their political conflicts. De Beauvoir’s heroine is a psychoanalyst. Her passionate affair with the American novelist, Nelson Algren, is critical to the action and her understanding of women’s choices.

Memoirs of a Dutiful Daughter

The Memoirs of a Dutiful Daughter is the first volume of de Beauvoir’s autobiography. It describes growing up female within the confines of a respectable traditional bourgeois family in the early 20th century – rebellion against a constricting faith and family and the psychological insight to the portrait of a girl who loves life and books and eventually men. It is a classic in the genre.

The Prime of Life

The Prime of Life is the second volume of de Beauvoir’s autobiography. It covers her relationship with Sartre during the war. It is both a chronicle of the times, a description of life under Nazi occupation, including the exodus from Paris, the return on foot, and an intimate, poignant portrait.

In A Very EasSartre’s de Beauvoir describes with incredible honesty the haunting account ofSartre’sth of her mother, a woman she often hated, but to whom she was so deeply attached that, in the despair of her death, she finds herself taking on her gestures. Both her hostility and unexpected love play themselves out on the page.

The Old Age is a devastating study of what it means to be old in a world focused on the young. It was the first book to break the silence about humiliations of age, including having sexuality and desires. Unfortunately is even more pertinent now than when it was initially published.

Simone de Beauvoir does what she did for women in The Second Sex for old age.

Adieux: A Farewell to Sartre

The strange, experimental twosome that de Beauvoir and the philosopher Jean-Paul Sartre formed and lasted with various permutations over 50 years reaches its peak in the book’ Farewell to Sartre‘. It is both a record of Sartre’s last years and an expression of her mourning, whilst also containing Sartre’s views on politics, women, childhood and religion.