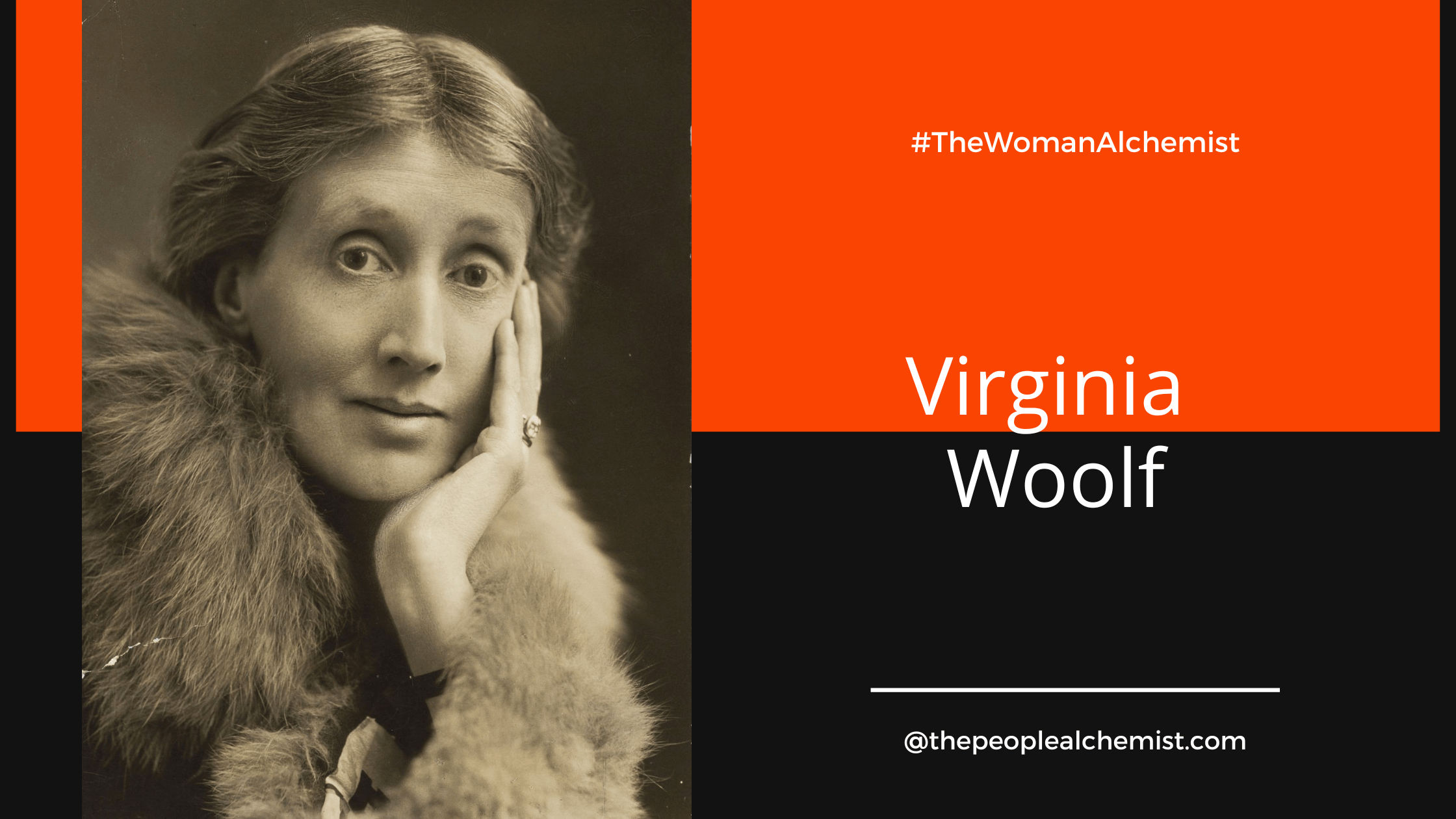 Hello, and welcome back to the #TheWomanAlchemist monthly feature.

I am continuing this year on my quest to promote/shine a light on other women, especially women writers who I admire (both as women and writers) and read. I pick a woman writer (that I love) whose birthday is in that particular month. And for January is Virginia Woolf.

Virginia Woolf was an English writer born on 25 January 1882 in London, England. She is perhaps one of the most innovative writers of the 20th century, better known for her novels, especially Mrs Dalloway (1925) and To the Lighthouse (1927). However, she also wrote diaries, letters and biographies and pioneering essays on artistic theory, literary history, women’s writing, and the politics of power.

Born Virginia Stephen, she was the first child of Victorian parents: Leslie Stephen, an eminent literary figure, the Oxford Dictionary of Biography founder, and his second wife, Julia Duckworth. Woolf’s father – who was later knighted for services to literature – gave her the run of his substantial library. Unfortunately, her mother, father and brother died in quick succession.

In 1904, Virginia had a nervous breakdown after her father died. She was plagued by poor mental health for much of her life and committed suicide in 1941.
Woolf’s personal life was a subject of fascination as much as her writing, including the complicated and scandalous affairs ( at the time) of the influential Bloomsbury Group, of which she was a central figure.

VIRGINIA WOOLF – WHERE TO START

Woolf helped to shape modern ideas about feminism, sexuality and mental health.
You can hear her voice and indomitable spirit through her books – here’s, in my opinion, where to start reading.

Mrs Dalloway (1925) is as patterned as a Post-Impressionist painting. The plot of the story seems simple: Clarissa Dalloway is throwing a party, and one can follow her preparations throughout the day. The story culminates with the party itself. However, the novel is intertwined with WWI veteran Septimus’s story, who suffers from hallucinations and haunting memories.

Everything comes together when the doctor treating Septimus arrives at Clarissa’s party with news of the death. Again, motifs connect the main characters and, finally, Clarissa’s intuition of why Septimus threw his life away.

The details of this single day expand to encompass their whole lives and celebrate the importance of our moment-to-moment thoughts and feelings.

This novel represents the epitome of Woolf’s distinct style and marks the perfect point at which to enter her writing. One of my favourites.

To the Lighthouse (1927) merged the novelistic and eulogistic forms. It was published on the 32nd anniversary of her mother’s death, evoking childhood summers.

This novel is perhaps one of Woolf’s most personal as it memorialises her in the vibrant and boisterous character Mrs Ramsay, who tends to her family and guests while at their summer home. Woolf has an extraordinary way of showing how experience is filtered through an individual’s perception at a particular time, through their stream of consciousness.

This style works beautifully to create a story so emotionally moving you’ll feel the true poignancy of all that’s lost in the inevitable onward march of time.

Orlando: A Biography (1928) follows the experiences of Orlando, who lived from Elizabethan through the entire 18th century. He then became female and experienced debilitating gender constraints.

Beyond the stream-of-consciousness, this animated novella demonstrates the breadth of Woolf’s imagination. Written as an intricate love letter to Woolf’s friend and lover Vita Sackville-West, the book depicts a life that blasts through the constraints of mortal limits with its title character traversing centuries and changing gender.

Woolf writes in a mock-heroic replica of biographical styles that change over the same time. I love this one!!!

Woolf planned an esoteric type novel that would be impersonal and abstract after praising an exhibit of Vaness Bell’s paintings resulting in The Waves (1931). Here she is at the height of her writing power.

Each section begins with a description of the sun moving across the sky and thus framing lives in a single day.

Between the gaps, the voices of six characters emerge in sections that move from their childhood to old age. Poetic language captures each of their sensory experiences of the world.

The Waves offers a six-sided shape that uniquely illustrates how each experiences events—including their friend’s death.

It may feel strange to read at first, but trust me; you’ll get it eventually. It’s a book to be kept within reach at all stages of life and read at intervals – you’ll differently identify with its six distinct protagonists as they age and change alongside you.

Considered by some critics to be an unfinished novel, Between the Acts (1941) is also Woolf’s last and, as a result, steeped in tragedy.

The book narrates 50 years of family history through the fall of class and patriarchal systems, the advancement of feminism, and the menace of another war. In addition, the novel illustrates the harm done to women and society over the years by sexual repression, ignorance, and prejudice.

It was published shortly after Woolf’s suicide. She found writing the book challenging while in the grips of her final depressive episode. Still, it’s a pertinent, insightful and underrated novel about the devastating impact of the two wars on Britain and its people. Like much of Woolf’s writing, Between the Acts is fascinated by time, its passing and how it can shapeshift. As a result, it’s an important novel to understand what motivated her.

Woolf captured the fast-changing world in which she was working, from transformations in gender roles, sexuality and class to technologies such as cars, aeroplanes and cinema. She explored the critical motifs of modernism, including the subconscious, time, perception, the city and the impact of war. Her stream-of-consciousness technique enabled her to portray the interior lives of her characters and to depict the montage-like imprint of memory.

A few of the previous #TheWomanAlchemist blogs celebrating women writers: